Thousands of visitors of the trade fair, including kids, joined in for the countdown as the teams set off to plate their dishes to perfection. The chefs had to go bolder, bigger and better for the attention of the judges. Celebrity chefs traded aprons for gavels, just for the day, to judge the finale of India’s first such Culinary Challenge. Chef Anahita Dhondy, Chef Manager, SodaBottleOpenerWala; Chef Ramasamy Selvaraju, Executive Chef, Vivanta by Taj and Chef Vinod Bhatti, Range and Commercial manager, IKEA Food, India, kept the budding chefs on their toes with constant inputs on using millets. The electrifying finale cook-off between the top two teams was video documented as a reality show for a cause by ICRISAT. The gripping moments of the entire challenge were captured as a five-part documentary reality series that will be part of both national and international endeavors to give the image of millets a makeover. The winners of the culinary challenge will be announced in the video series to be released online soon. Sign up for updates at – https://www.smartfood.org/culinarychallenge/ The student chefs surprised the visitors of the Organic and Millet International Fair – 2019 by using millets as rice, as crust, as beverage, as dessert and even as fillings.

Chef Anahita Dhondy @anahitadhondy – a food geek, a Smart Food Ambassador and a global advocate of millets.“Millets are vital to sustainable food. The Smart Food Culinary Challenge is about teaching the young chefs how food and the industry around it should evolve for a better environment.”

Chef Ramasamy Selvaraju – a man on a mission, a pioneer in introducing millets to fine dining. He was awarded the title of Chef of the year by the ministry of tourism in 2014.“It is common belief that millet are hard to cook and time consuming. For the finale, young chefs cooked two complex millet recipes in half an hour in the presence of a live audience. They are up for the challenge and you should be too.”

Chef Vinod Bhatti @chef_vinod_b – a top culinary critic and a masterchef pushing boundaries in culinary science. “I am delighted to see student chefs enjoying while mastering the art of cooking millets. This effort will go a long way in pushing millets to be included in healthy yet tasty diets and daily consumption.”

“I was amazed and pleased indeed to learn different ways of substituting rice and wheat for millets,” said Ms. Suchitra, a visitor cheering from the stands. The live audience were exposed to innovative, healthy and easy-to-cook recipes such as the Jowar Crusted Pomfret, Barnyard Millet Vegetable Terrine, Kebabs with Millet Fillings, Proso Millet Paella, Deconstructed Ragi Carrot Cake, Foxtail Aam Royale Beverage and Coco-pearl smoothie. “The first thing I shall do after I go home is cook up some of these recipes. The exciting part of this exercise is the cook off between young chefs, it’s quite a novel idea,” said Ms Caroline Radhakrishnan, a food blogger. Krishnappa, a young millet farmer from Karnataka brought along his two kids to the millet product showcase to share the excitement. “This is very exciting. Wish there was a cook off for the visitors or farmers. Looking forward to more events such as these in the future,” he said. The preliminary cook-off had 28 teams held at MS Ramaiah University of Applied Sciences, which were then reduced to six teams for the finale on 19 January. Watch the journey of finalists Deepa KM and Rohan Singh from NITTE Institute of Design and Culinary Art, Bangalore, here – https://www.youtube.com/watch?v=c1Zn_rw0IUM

Each team cooked up one traditional and a one contemporary dish including recipes such as Biryani, Dal Bati Churma, Pooris, Noodles and Srilankan Hoppers made with millets. The judges scored the preparations on the usage of millets, taste, portion size, platting and time management and selected the top two teams to compete in the finale round. This live show of the Smart Food Culinary Challenge was organized through a partnership among Government of Karnataka, ICRISAT and MS Ramaiah University of Applied Sciences. Overseeing the live show were Dr Shivashankara Reddy, Minister of Agriculture, Government of Karnataka, Ms Joanna Kane-Potaka, Assistant Director General, Strategic Marketing and Communication, ICRISAT, Dr Vilas Tonapi, Director, IIMR and Dr K G Jagadeesha, Commissioner for Agriculture, GoK. The judging panel held a debriefing session at the end of the live show and encouraged the budding chefs to continue experimenting with millets. Concluding the event, Chef Vinod Bhatti said, “The challenge brought out the best in each chef, forced them to experiment. Here, today, we discovered the new future foods.” 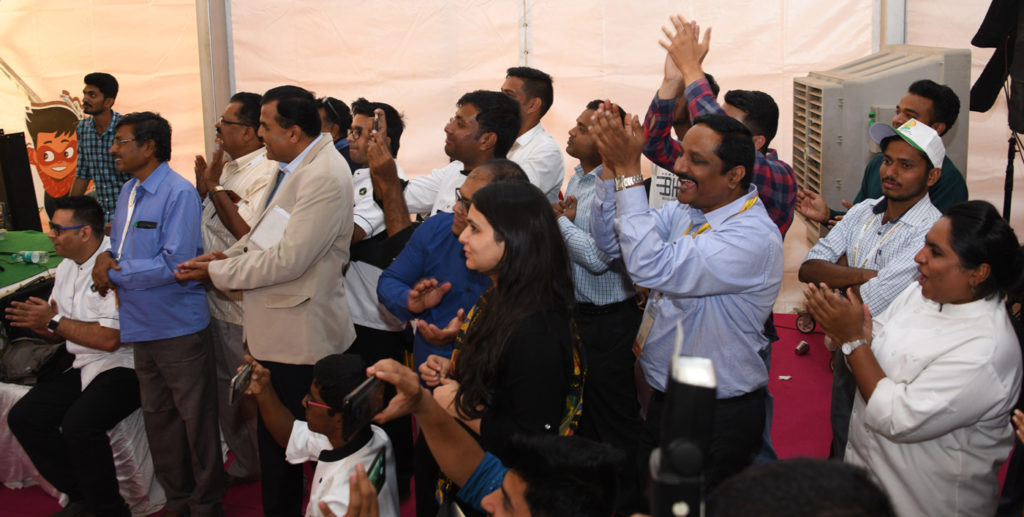