The first Smart Food Culinary Challenge was launched with 58 student chefs from 16 culinary institutes across India. They were competing to be the finalists to play-off for the grand finale to be held at the Organics and Millets International Trade Fair in Bengaluru 18-20 January 2019. From traditional to continental cuisine, foxtail millet-banana flower biryani to pearl millet ghevar, the student chefs tested their culinary skills to compete to create a three-course meal in cooking millets and sorghum.

Ranging from first-year graduates to postgraduates, these young chefs were determined to put their best foot forward into making a three-course meal with three different millets. 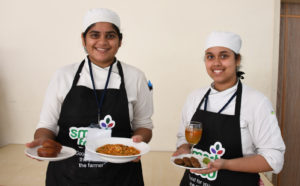 The Smart Food Culinary Challenge was held at the Faculty of Hotel Management and Catering Technology, M S Ramaiah University of Applied Sciences, Bangalore on 5 December, 2018, and is part of Organic and Millet International Fair – 2019, an annual millet fair organized by the Government of Karnataka (GoK).

The challenge was captured on video alongside the play-offs and journeys of these young chefs, including their experiences in creating new recipes by substituting rice and wheat with millets and millets-based ingredients.

“Since millets are gluten free, the dough doesn’t bind well like wheat. We had to challenge ourselves to use millets in wheat-based pastries” – a young chef told the judging panel during the presentation.

For more details on the upcoming challenge sign up at – https://www.smartfood.org/culinarychallenge/

While asking the students to name all the 9 kind of millets, Chef Vinod Batti congratulated the participants for their attempt and encouraged them to continue experimenting with millets. The seven teams that made it to the finals will be announced online before the fair.

The millet recipes (starters, main course and dessert) presented in the challenge ranged from authentic to fusion and western cuisines. The Smart Food Culinary Challenge has set the stage for the hotel management industry to introduce millets in the curricula and encourage upcoming chefs to use them as they are Good for You – the Planet – the Farmer.