We are what we eat

Around the World, Global, Millets, Sorghum

Our current food system is producing more food than ever, but that doesn’t mean everyone everywhere has equal access to healthy and nutritious food. It also doesn’t mean all that food is being produced sustainably so we’ll also have it in the future.

Large-scale monocropping of maize, soy, wheat and palm oil erodes the soil and destroys ecosystems, while diets overly dependent on these crops lead to both obesity and malnutrition. If this weren’t enough, a globalized food industry is creating ever larger markets for ultra-processed foods and snacks high in fat, sugar and salt.

Our programs aim to change this situation by bringing diversity back to the farm and onto the plate. While the challenges differ from country to country, our work has a similar approach. We put people at the center of solutions. We take a close look at grassroots initiatives, work with consumers and smallholder farmers and bring their ideas to the attention of policymakers and international institutions.

Allow us to take you to Indonesia, Bolivia, Zambia, Kenya and Uganda. In these countries, we’re getting street vendors, municipalities, cooks, farmers, activists and politicians to not only fight malnutrition in innovative ways, but also to slowly change the way the food system works.

Street vendors to the rescue

Indonesia’s statistics on malnutrition aren’t impressive. In fact, the country faces a double malnutrition burden. Almost 40 percent of children under five are stunted due to poor diets, and a quarter of the adult population is overweight.

As in many other places, people here are eating more and more ultra-processed fast foods. This is especially true in urban areas where often the most convenient options are minimarkets selling cheap, unhealthy snacks and treats.

This makes local fresh food markets and street vendors vital for low-income citizens. Our Sustainable Diets for All program is therefore on a mission to work with this informal sector, stimulating community-based initiatives and encouraging citizens to find – and create – healthy and affordable alternatives.

How does that work? Well, sometimes you need to throw a party. 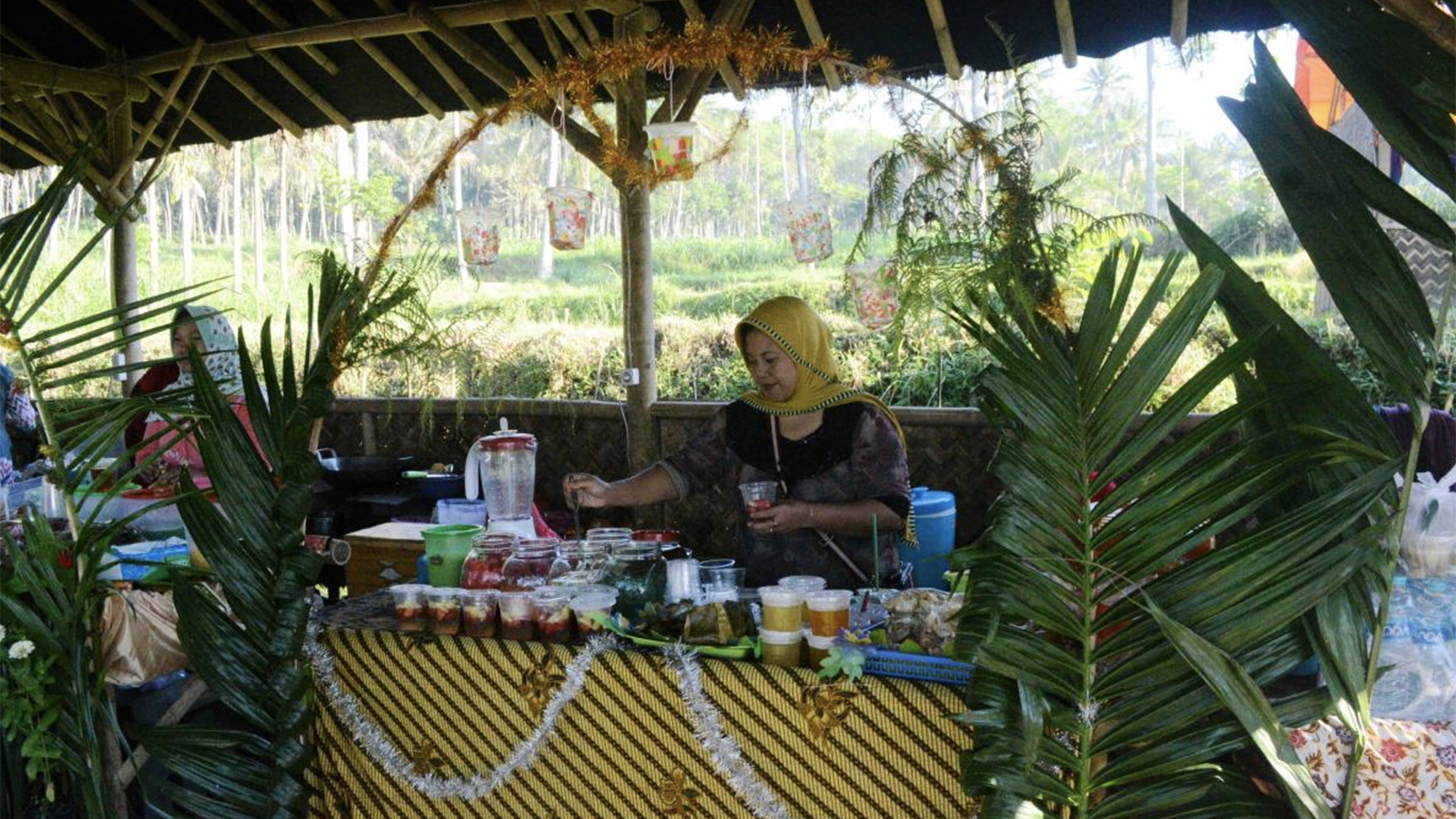 Pasar Lumpur ‑ or Mud Market ‑ is a monthly community market in Ledokombo, East Java. It was started by our partner organization Tanoker, a learning center for migrant workers and their children, when the kids wanted to learn to play mud polo. A year later, the market has grown into a celebrated community event. 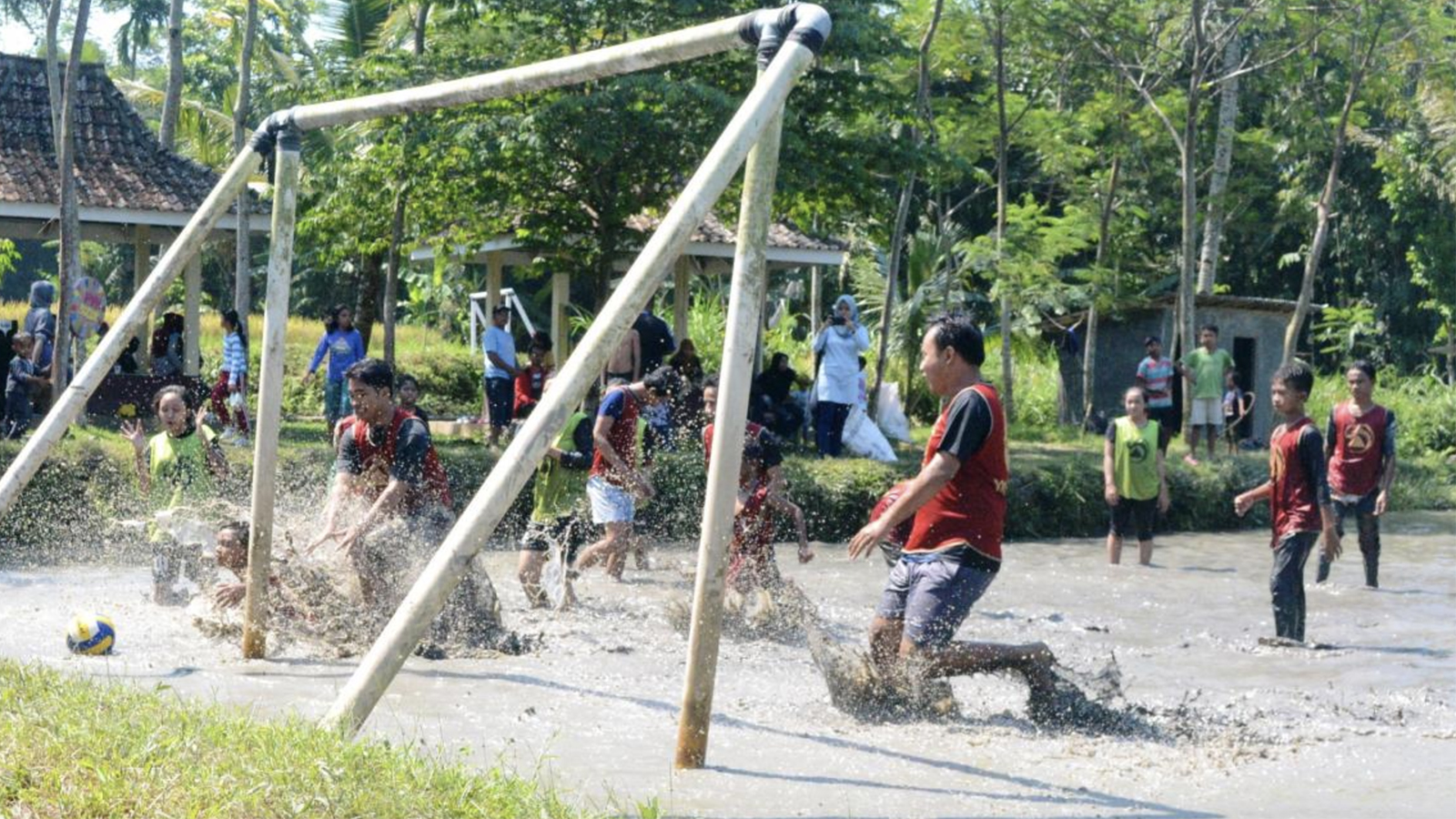 In May 2018, over a 1,000 people gathered to celebrate the market’s first anniversary. Activities included a “healthy walk” along rice paddies, live music, pillow fights, stilt walking and mud polo. Naturally, there were plenty of stalls selling healthy food and traditional crafts made by Tanoker’s members. Ibu Lim, a mother selling homemade juices and healthy snacks, said, “I’m so grateful for this event. This anniversary has definitely added to my income and helped me promote my healthy cooking. I got many orders for the next two months.”

Bolivia is one of the homes of quinoa, and the country’s rich biodiversity generates a range of traditional and healthy foods. Yet Bolivian diets – as those in Indonesia – are shifting towards highly processed products. Despite a national increase in food consumption, the prevalence of anemia remains high: 73 percent in rural areas and 53 percent in cities.

Indigenous Andean grains are an important key to the solution because they’re nutritious and increase biodiversity. By supporting their production and consumption, we provide healthy food choices for consumers, empower smallholder farmers, and increase urban food security.

Meet some of the citizens and activists who are leading the way in Bolivia. 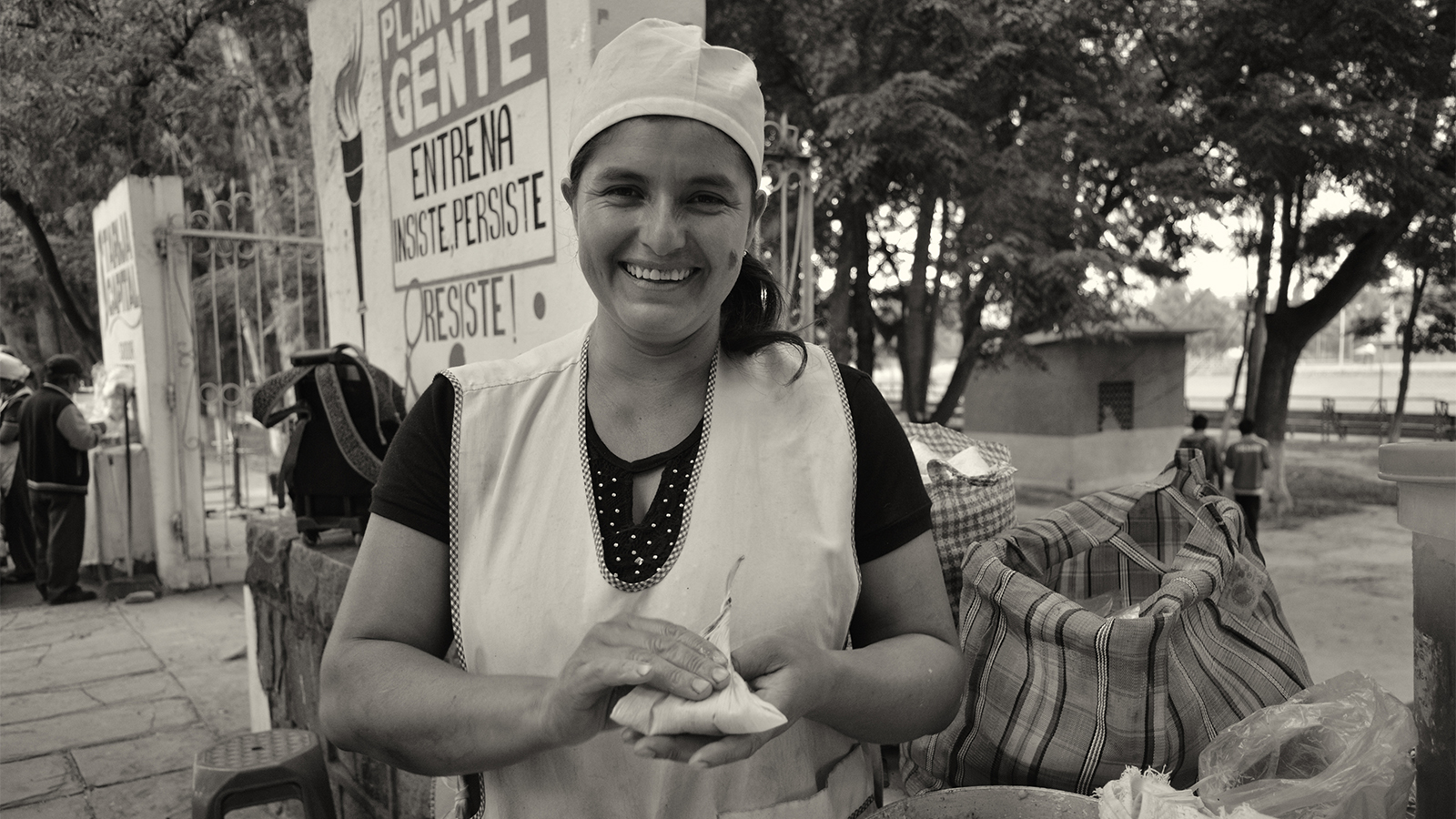 Using a recipe that belonged to her grandmother, Giovanna Gaite sells humintas, a pre-Hispanic corn-based dish, from her kiosk in La Paz. She belongs to “Gourmet Street”, a women entrepreneur’s project that sells healthy food. Today, Giovanna shares not only her delicious corn pies, but also her story at food gatherings all over Bolivia. 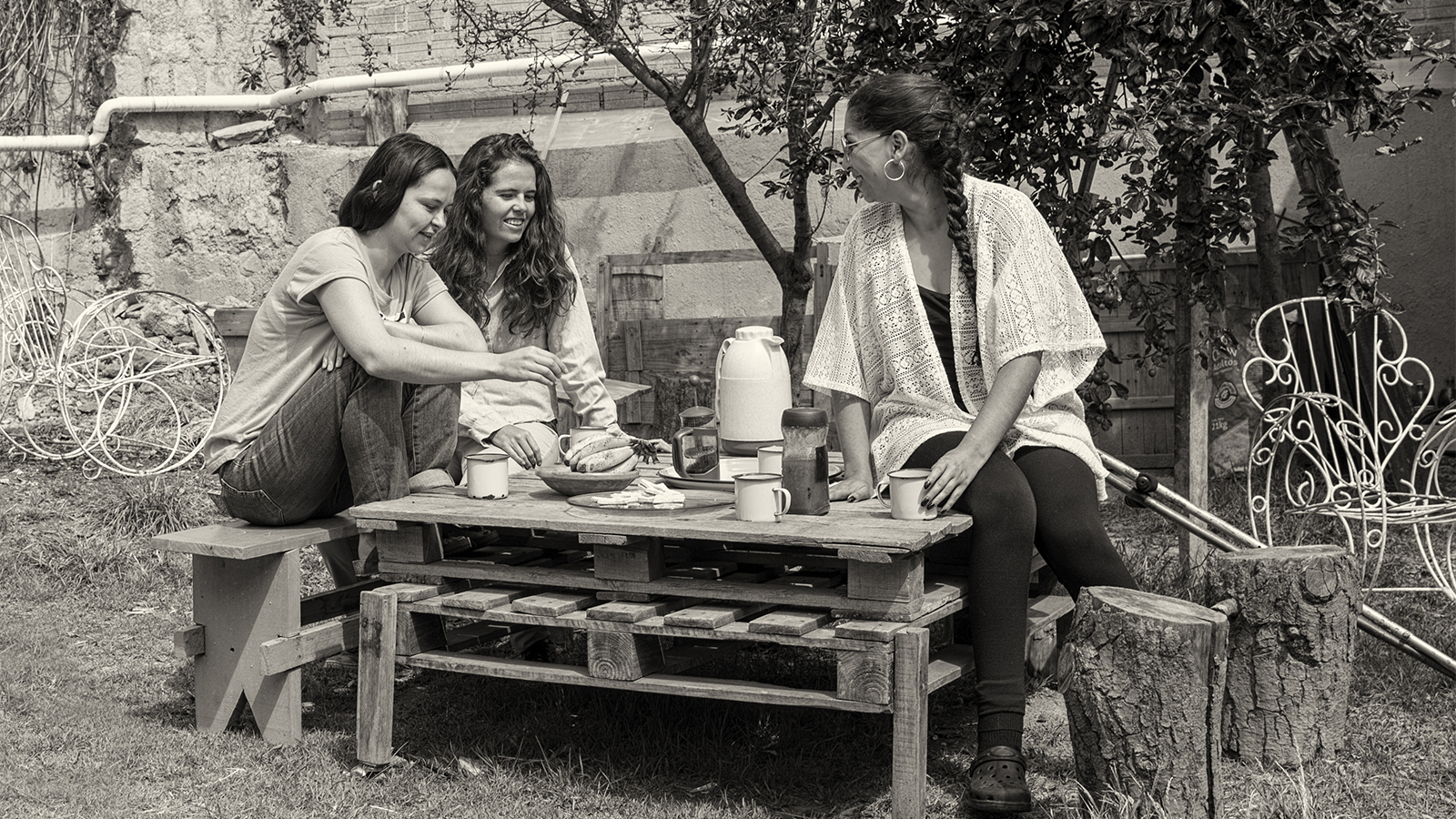 Maira, Nina, Matilde and Angela are activists from the “Conscious Food Movement.” To them, food is an instrument of social change. They organize activities focusing on the environment and climate change. During these events they use facts, creativity and flavors to show the social and political impact that food production has on our planet. 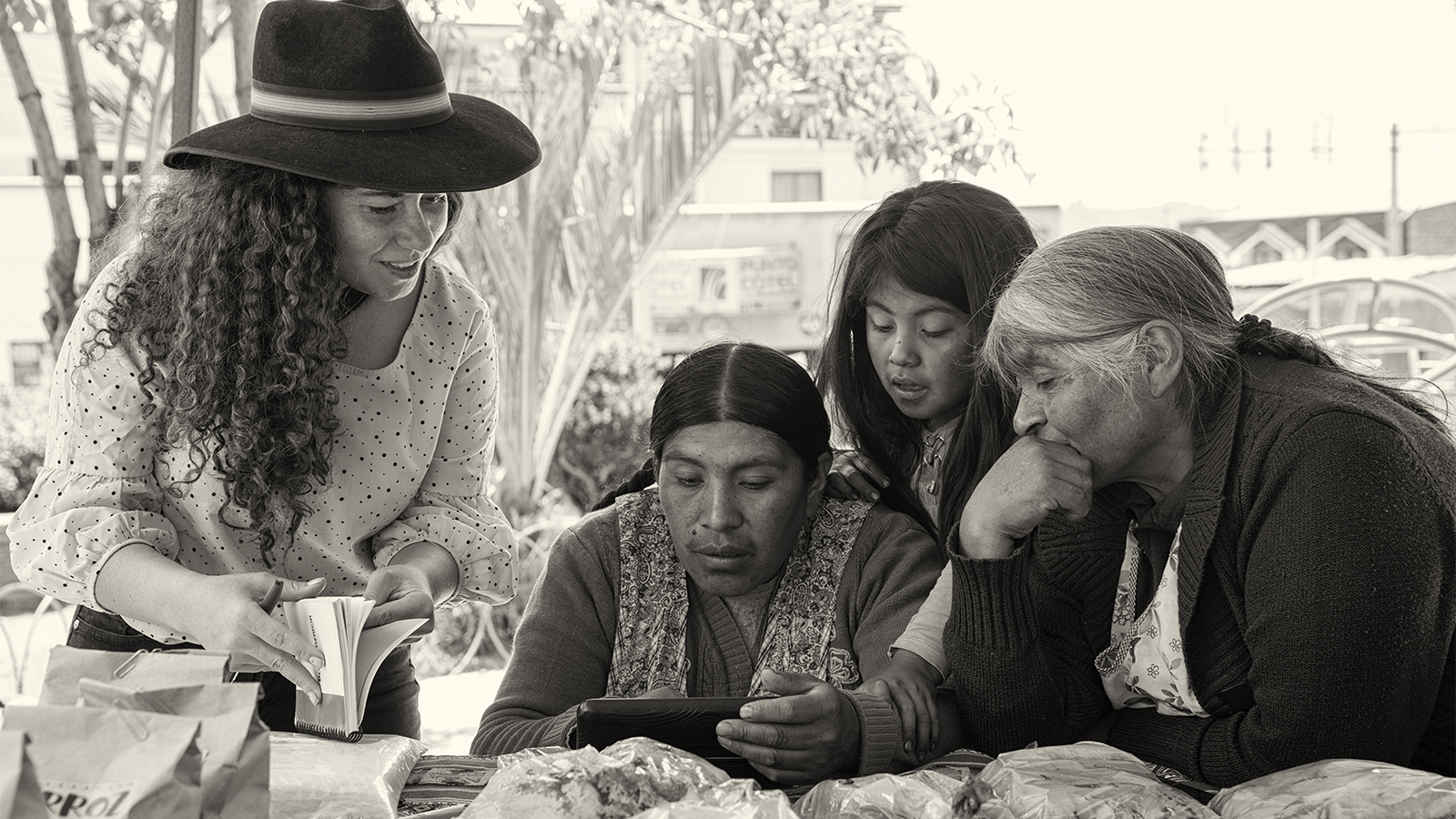 Katyussa Vega is a photographer and food aficionado. She is the co-creator of ECOTAMBO, an organic market where producers and consumers meet face to face. 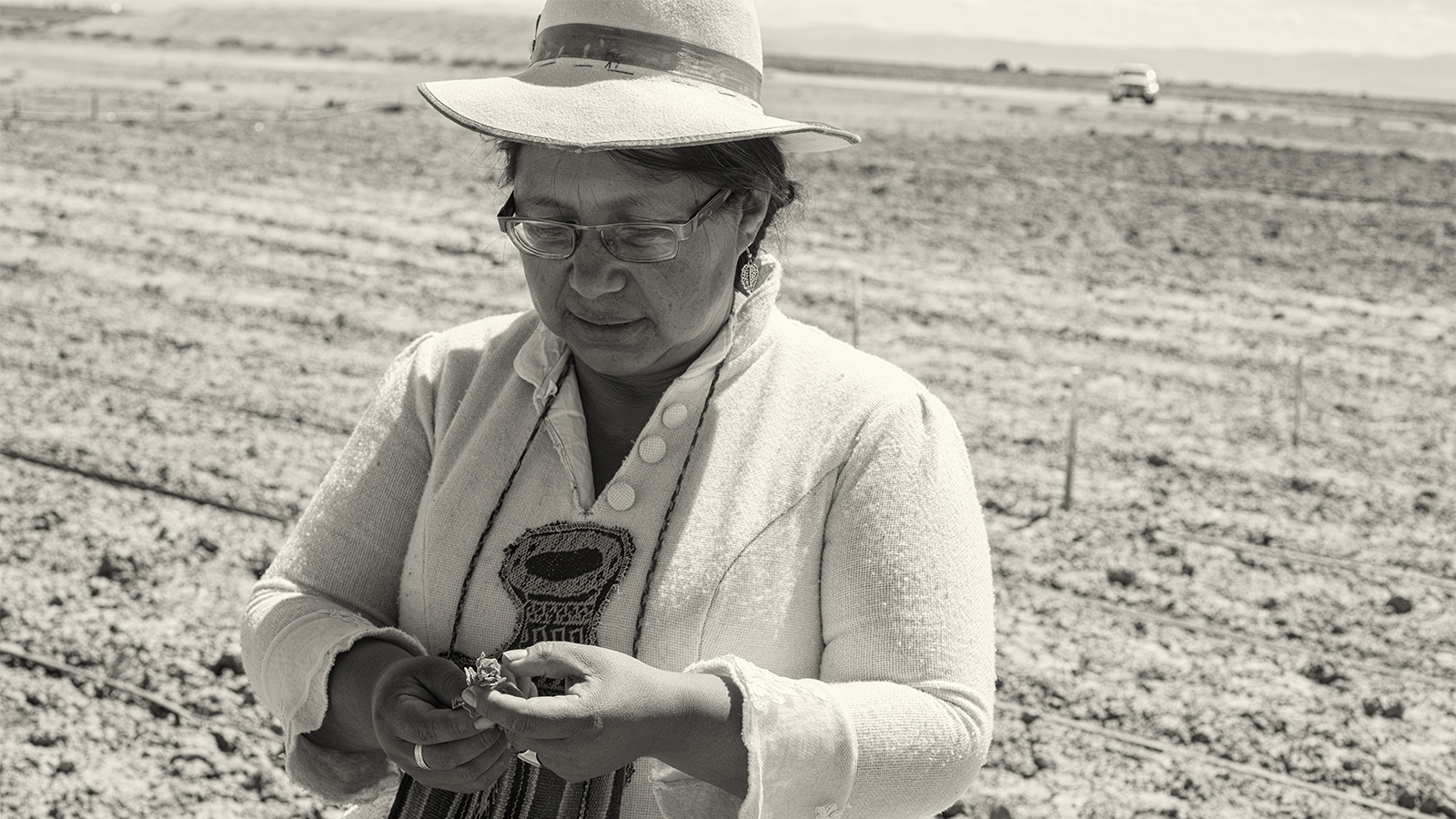 Trigidia Jimenez cultivates cañahua, a remarkably nutritious grain of the high Andes area. She has even become an ambassador for this grain, which is now included in NASA’s menus. The work on her farm has revitalized the soils in the area and produces other organic and sustainable crops, all of which has also improved the quality of life of other producers in the area. 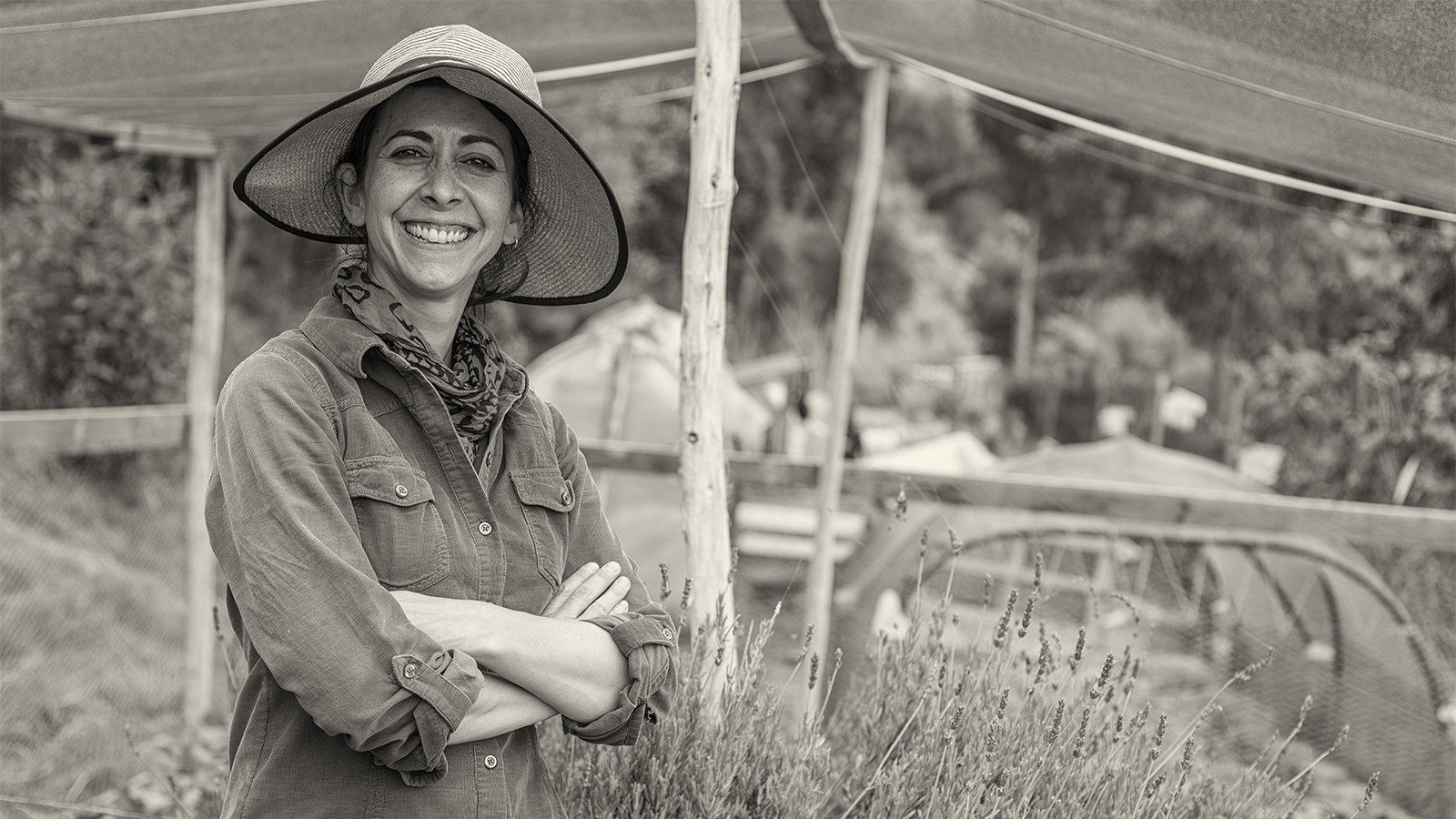 Variety on the plate

Undernourishment and malnutrition rates for Zambia are extremely high, putting it second from the bottom in the Global Hunger Index 2016. These stunning facts are largely attributed to the limited diversity of the country’s food production and consumption. Over 90 percent of agricultural produce is centered on maize, posing a threat to food security and nutrition.

Our efforts in Zambia are focused on providing alternatives to growing a single crop. This so-called mono-cropping degrades ecosystems and reduces crop diversity, which ultimately means much less variety on people’s plates.

We work with civil society organizations and the media to convince the government and the private sector to introduce policies and practices that diversify Zambian food production.  Our advocacy has led Zambia to eliminate government subsidies for growing maize.

We produced a short film with our partner IIED that looks at the challenges facing Zambia as it promotes dietary diversity. All interviewees agree on one thing: there’s an urgent need for diversification in Zambia’s agricultural production and consumption habits.

The soul of agriculture

If we’re concerned about the increasing lack of diversity in the world’s agricultural production, we should take a closer look at where agriculture begins: seeds. A diverse supply of nutritious food is only possible if farmers have access to seeds that let them develop and grow a wide variety of crops.

But large agricultural businesses – often taking advantage of apathy or protection from governments – put patents on seeds that end up eradicating farmers’ seed saving and sharing traditions. This also means that farmers cannot breed the right seeds to adapt to climate change.

We believe seeds should remain in the public domain – in an “open-source seed system” – so farmers, breeders, gardeners and research institutes can save, reuse, exchange and improve seeds.

Our Open Source Seeds Systems program has a history that started a decade ago in India. There it proved its success.

Indian farmers have long felt they were financial hostages of a system requiring patented seeds and the use of pesticides. Some ten years ago, an increasing number of them were resorting to suicide out of utter despair. Then a group of local farmers came up with an alternative that, with Hivos’ support, grew to become a nationwide network of open and accessible seed banks. There was one caveat: farmers were not allowed to patent the seeds so these could be available for further breeding. The Indian success formula of open source seeds is what we are currently implementing in East Africa.

How do we use the ideas of citizens and community-based organizations to actually reshape food systems? We invite them to one of our Food Change Labs, which we co-host with IIED.

The Labs are an innovative way to find answers to complicated food issues. For example, urbanization, globalization and climate change are increasing food insecurity, which hits low-income citizens hardest. That is why our Labs put citizens at the center of finding solutions. We connect them with local government officials, policymakers, researchers and civil society – anyone who can propel their ideas into policy.

In Uganda we have proven that these ideas can be very effective. 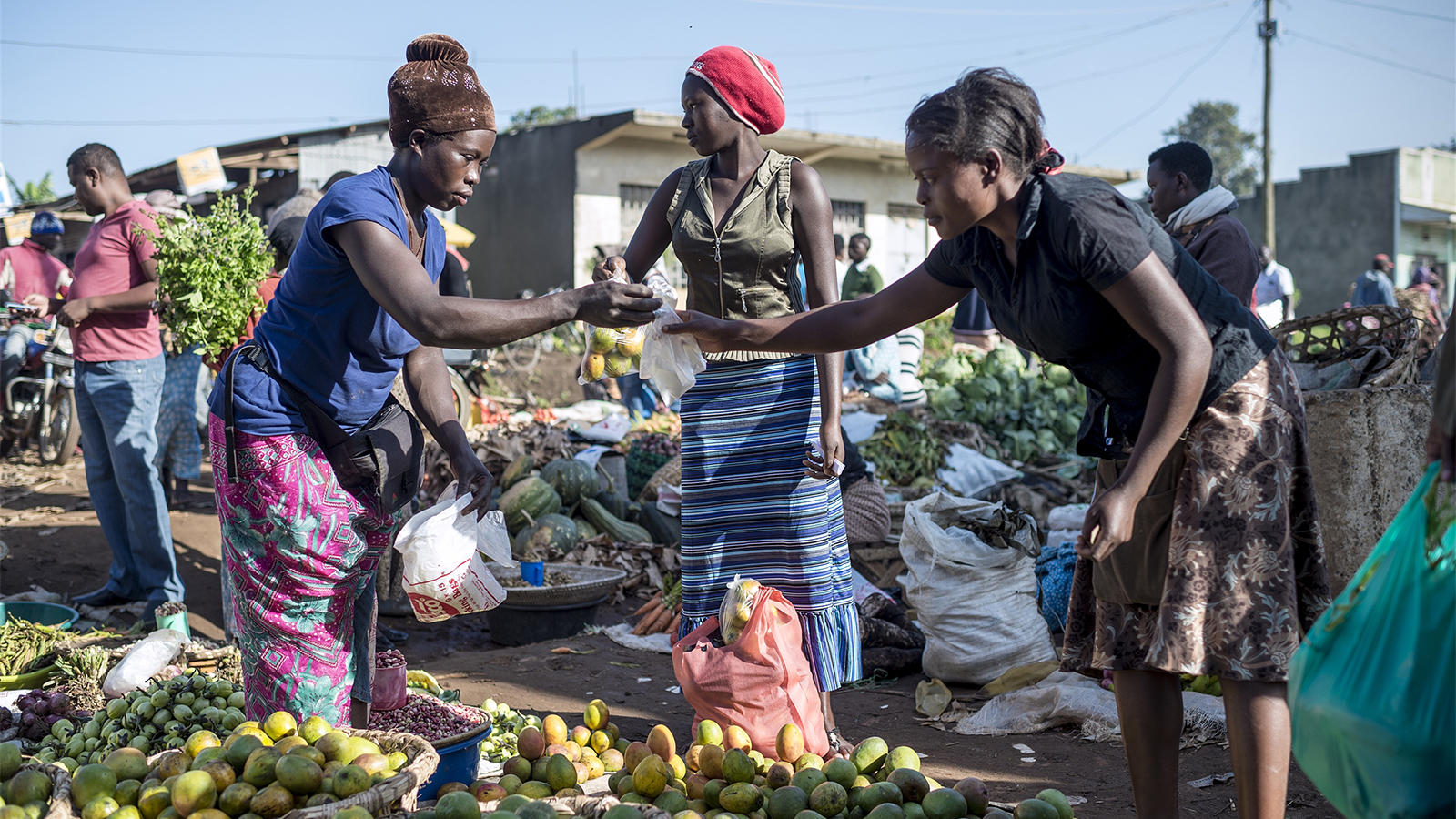 Fort Portal, Uganda, is slated to grow from 50,000 to 500,000 inhabitants by 2040. Yet the food system of the city and the surrounding Kabarole district is unprepared for such rapid growth. The Food Change Labs we organized there with our partners brought together smallholder farmers, urban food consumers, street food vendors, city planners and municipal authorities to explore problems regarding food supply and quality and come up with innovative solutions. 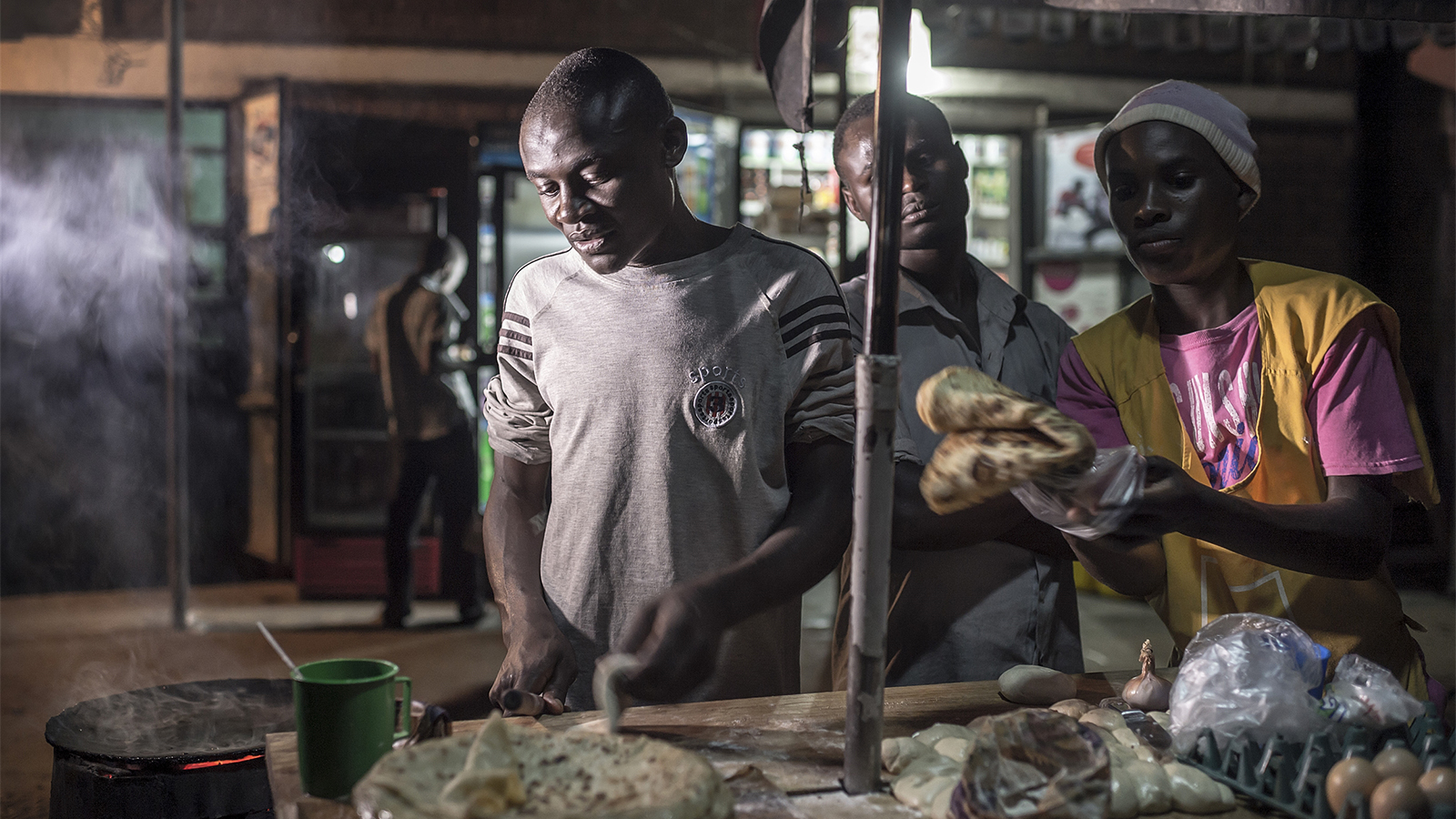